Penny the Ground-Painted was always telling anyone who would listen about being abducted by aliens and she had the silver bracelets on her ankles to prove it.  Erica the Red-Eyed was not impressed.

Erica lives at 3,000 steps up in Noisy Delirium Circle.  It’s a long walk up from the harbor frontage.

Eventually, Erica reaches her elite apartment high in the sky.  It was actually built by Eustace the soarer and Wendy the wave-kisser when Noisy Delerium Circle was still called Black-Browed Hilltop.  According to rumour, Wendy was last seen going for a dive behind a fishing boat and Eustace now hangs out in a different part of the City, often disrupting other couples by trying to hassle for a new partner.

Our legends tell of the giant black were-penguins that devastated our communities hundreds of generations ago.  Today we were visited by friendly aliens from the planet Ostr.  Earlier we visited their space craft as it lay on the sea and what a lot of space it seemed to contain.  We also bounced up and down out of the water beside their landing craft to get a good look at them as they came in.  These Ostr aliens are giant multicoloured hump-backed penguins and while they keep a respectable distance, they also allowed us to come right up and look at them.

Pity about Penny the ground-painted.  Last time we saw her she was heading off to a pair of sea lions to tell them how she had been abducted by aliens.

… And so it was in the afternoon that we disembarked at West Point Island.  Michael, the Island’s caretaker, greeted us and generously provided a Land Rover bus service to the black-browed albatross and rockhopper penguin colony and also a service back, later in the afternoon.  This was much appreciated by those of us who were disinclined to venture far.  There was a much higher proportion of albatrosses to penguins than in the previous day at New Island and it was very easy to get quite close.

A few people took a long scenic trek and another group elected to climb an impressive hill in the other direction.  Though it was very windy at the cliff where the albatrosses were, it was very calm at the top of the large hill where a spectacular panoramic view presented itself.  There were also hundreds of albatrosses sitting out on the water.

Layered rocks on the cliff edge

Panorama looking back from the cliff top

The wild coast far below

Hundreds of black-browed albatrosses bobbing on the waves

A view in late afternoon light while walking back

Anchors on the beach

Wreck on the beach 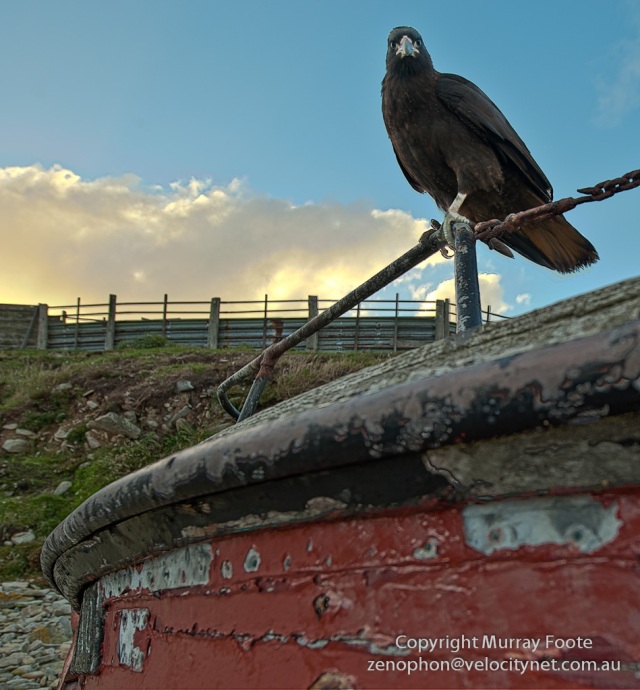 Cara cara, guardian of the wreck

Then a calm and easy return to the ship but the day was not finished yet.  Dinner was a barbeque on deck with loud dance music, mainly rock & roll and 60s pop.  Everyone donned strange headgear and there were exuberant displays of dancing by passengers, Aurora staff and the Russian crew.  Michael and Jeanette attended from the Island and may have wondered what strange universe they had arrived in.

… And I forgot to mention – a fin whale was visible from the ship feeding and with attendant seabirds for about 20 minutes though only the earliest of us back got to see this.