Early in the morning we had reached the Chinese Great Wall station near the southern end of King George Island. 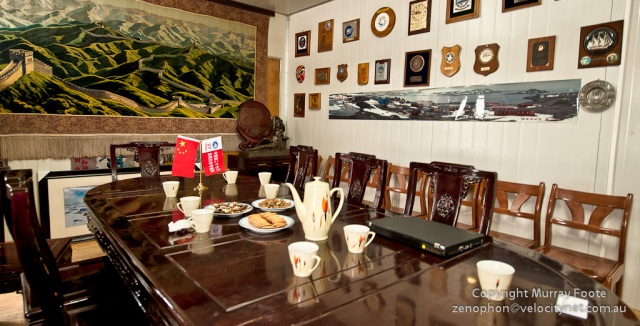 Inside the Great Wall Station

At about 8:30am we jumped into the zodiacs for a cruise around and a visit to the Chinese station.

There were lots of gentoo penguins standing around on the shore, many moulting, the odd cormorant and a few skuas.

The return trip was rather eventful. The engine repeatedly failed on our zodiac. We eventually got back to the ship and one person disembarked before the zodiac was swept away again. They decided to hoist the zodiac on board but we were too heavy for that so we had to transfer to another zodiac at sea. This was not made easier by having to carry my heavy photographic pack inside a water proof bag. I quickly worked out that trying to straddle two zodiacs in the surging sea was not a viable option so I dived from one to the other when they were together. It all worked well enough in the end.