An hour after sailing around the Acropolis iceberg, we encountered an iceberg with siz chinstrap penguins along for the ride.  There are two of them here, and six snow petrels in the background.

Here are the other four, not far from the first two.

And from another angle, as the ship sails by.

Frank Zappa warned “Don’t you eat the yellow snow” (Apostrophe, 1972), though here it’s ice and there are no huskies (or eskimos) to be seen. 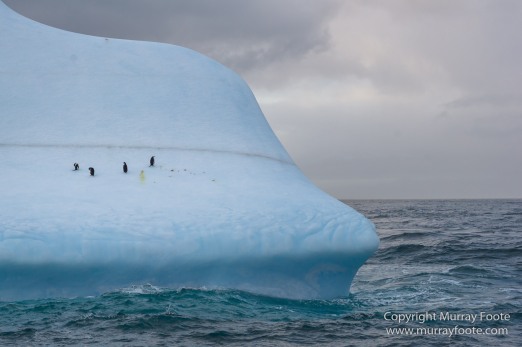 Here the are from a bit further back.  Hard to tell whether this is the bow or the stern of their ship.

An overall view from the back.  So no penguins visible now.

Its shape looks quite different from different angles.

Here they are again.  After they calve from an ice shelf, icebergs can melt in the sun, become unstable and turn over.  You don’t want to go too close to an iceberg because you never know when that will happen (though the penguins probably don’t greatly care).  That diagonal; grey strip is probably a previous water line. 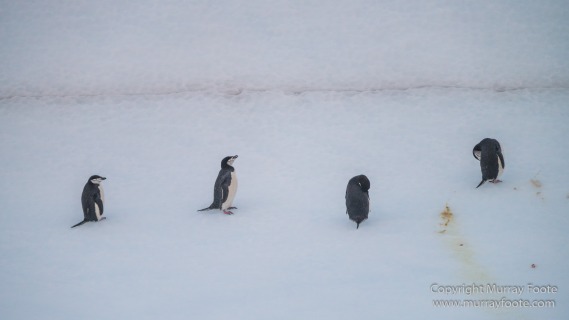 Here they are again.  They’ve shuffled their order since first encountered. 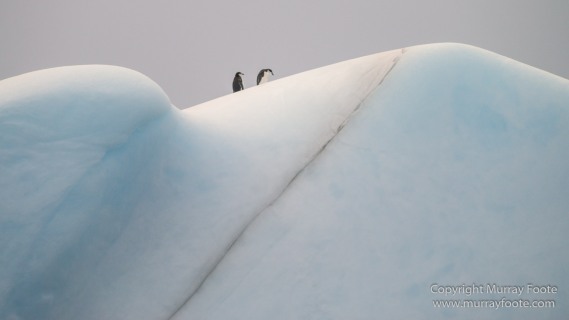 Maybe the two on top have moved.

Blue lines on icebergs can be caused by fresh water that is quickly frozen.  The brown lines.are probably from a layer of dust, perhaps when the ice was part of a glacier. 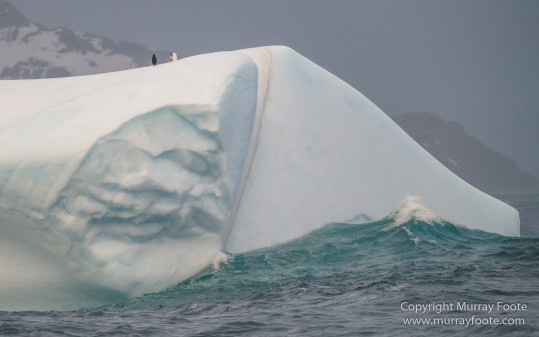 Those two penguins are certainly well away from the waves. 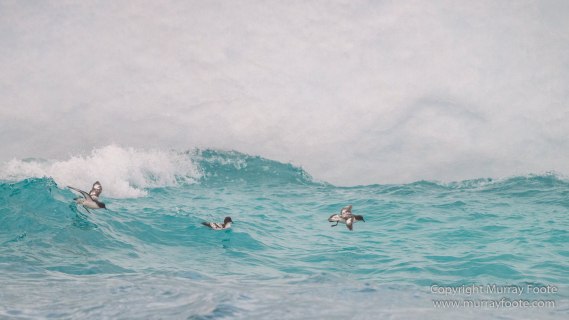 Here are some cape petrels beside the iceberg.  Perhaps looking for some fish thrown up in the turbulence. 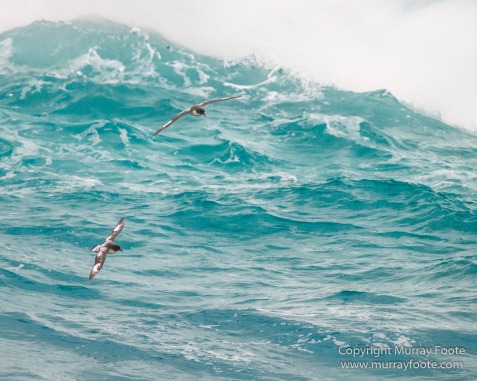 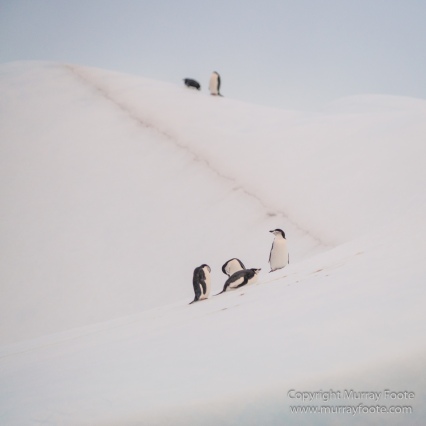 All six of them in the one image.

And they’re not as close together as they seemed in the preceding image.

Those big diagonal bands could be relics of rolling events.

Before we left Stanley, we crowded on a lifeboat for a drill, all no doubt hoping we wouldn’t encounter the real-life situation, tossed on a wild sea like a can of sardines.

A last glimpse of the Falklands as we sail from Stanley, out of Blanco Bay.

There were huge numbers of sooty shearwaters sitting on the water (and here flying from the ship).  Jóhann Óli estimates there were 8,000 of them. 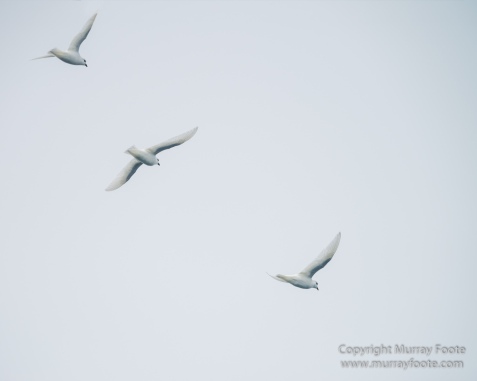 Visibility was generally poor during the crossing so I didn’t chase images then and we are now near South Georgia, three days later. 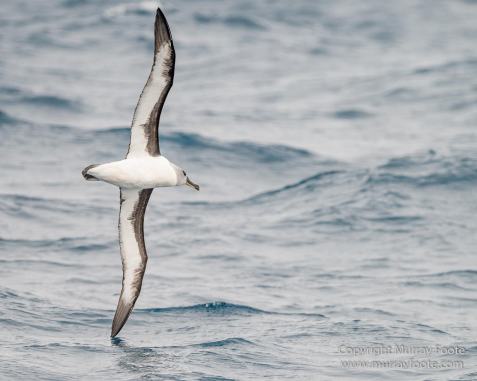 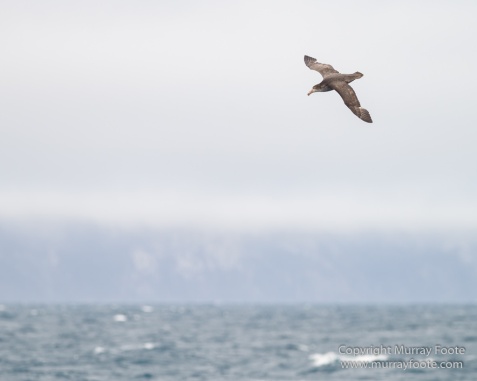 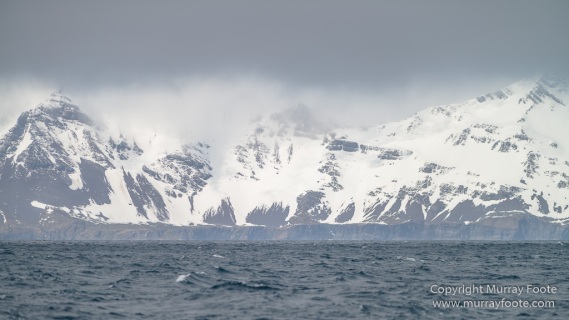 The looming mountains of South Georgia. 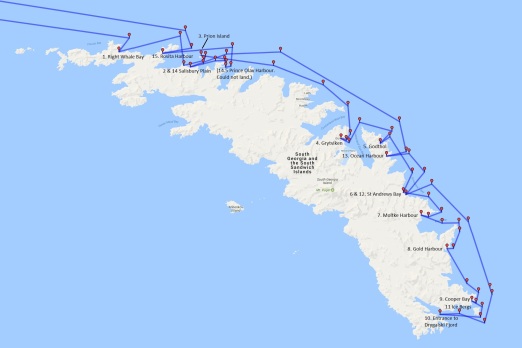 Map of journey.  Click to expand to large size (around 2,000 pixels wide).

The return route line is generally outside the incoming line and the landings are also numbered.

I have been on several tours but this one stands out for the quality of the company.  There was 48 of us almost all photographers, the vast majority of those of professional quality and specialising in wildlife.  They included Ole Jörgen Liodden and Roy Mangersnes of Wildphoto and Joshua Holko, Daniel Bergmann,  Eirik Grønningsæter and Bonnie Yap, with whom I journeyed from Spitzbergen to Iceland in 2013. 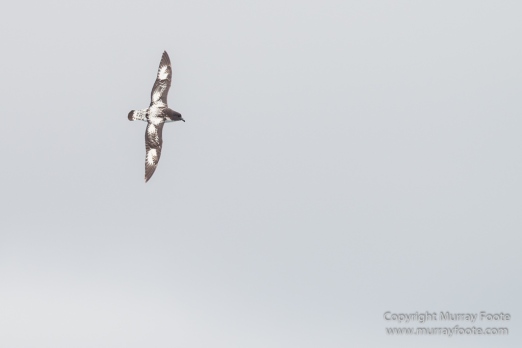 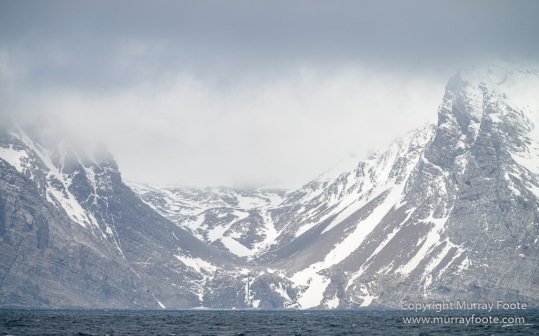 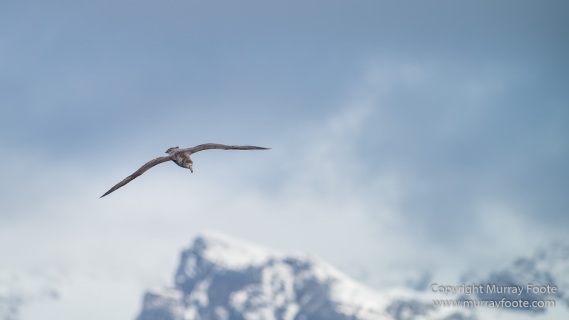 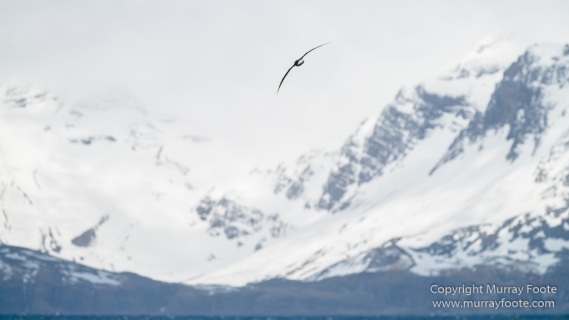