I was heading off along the north coast of Lewis towards the Butt of Lewis and stopped in at Dun Carloway Broch.  But the weather was closing in so I took a few shots and decided to return on the way back.

The roofs in the foreground are of abandoned croft houses which may have been built with stone plundered from the broch.  You can also see the commanding defensive position of the broch. 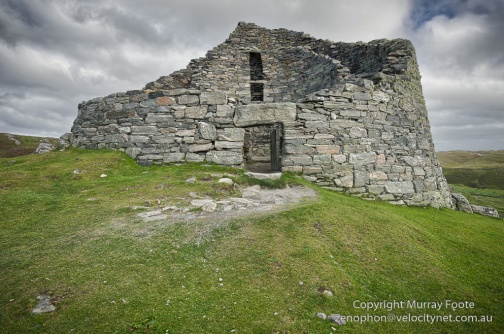 The weather had cleared when I returned in the later afternoon.  This is a view that very clearly shows the characteristic double-walled structure of the broch.

The view from in front of the broch with the countryside stretching out into the distance.

Dun Carloway Broch was one of the first ancient monuments in Scotland to be protected.  An act protecting it passed in 1882 and the State assumed responsibility for its care in 1887.  It had been pretty much complete as late as the 16th century.

There has been a considerable effort at consolidation of the broch.  In its original round form it would have been well protected against the wind but with sections exposed, winter gales can work stones loose.  This requires maintenance by skilled masons and some use of metal bars for bracing.

This of course is the internal stairs of the broch, a feature common to all brochs between the two walls. 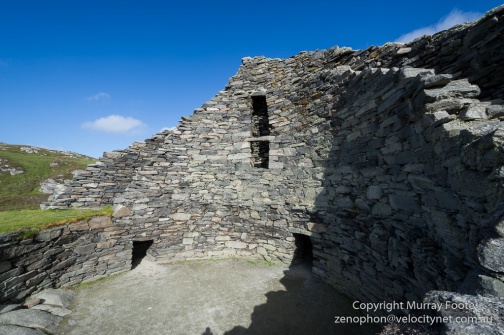 Dun Carloway Broch is thought to date from the first century BC.   At around 500BC on Orkney, prior to the first brochs, there were roundhouses with massive walls.  Roundhouses probably also existed in other places though they have not been discovered elsewhere so far. 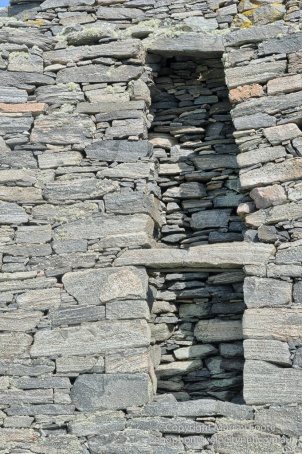 Brochs would have contained an internal wooden structure and often been roofed over.  The voids we see here would have distributed heat from the central fire to keep the galleries between the walls dry. 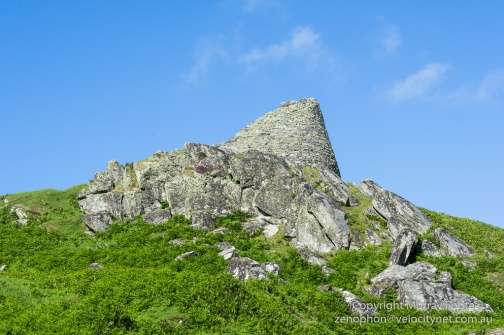 Building in stone is no doubt very labour intensive but stones were not a scarce resource.  The same cannot be said of the wood for internal structures, which may have had to have been imported.  This is why some have said that brochs were a form of conspicuous consumption for competing with the neighbours.  Conversely, it may simply be a behaviour we are increasingly familiar with today where available resources are exploited ruthlessly until the resource supply situation becomes untenable.