.
Links go to colour posts (with more information and historical context). If an image does not have a link, the preceding one applies. 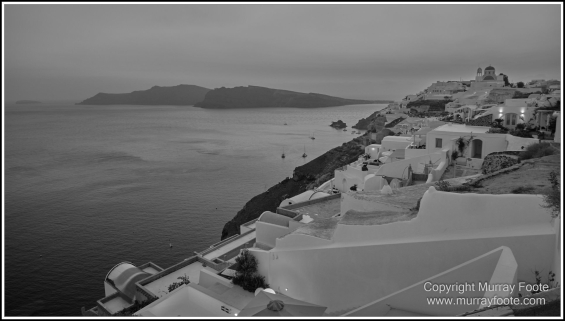 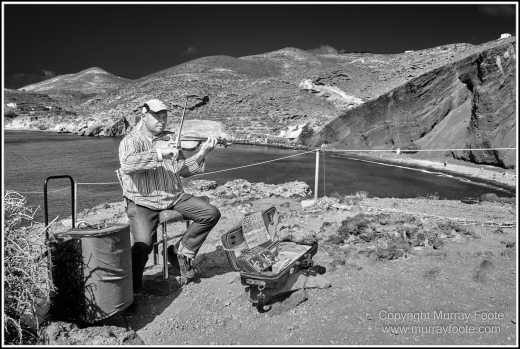 A musician busking on the headland before Red Beach. 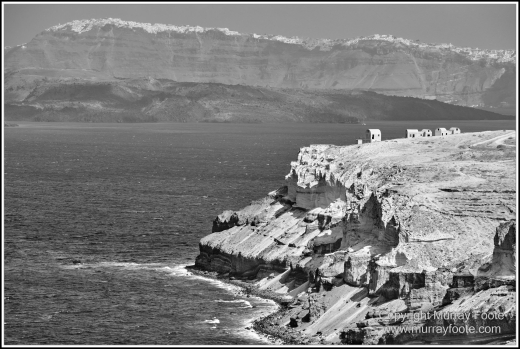 Looking north-west from near the lighthouse.

Looking up the south coast.

Looking down from the caldera cliffs. 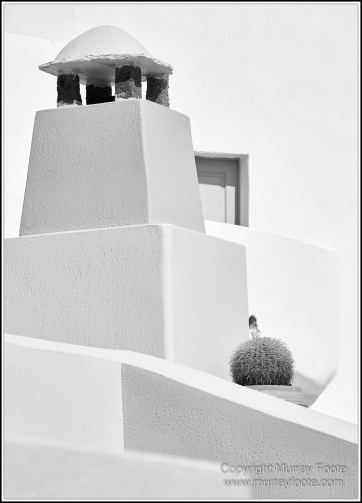 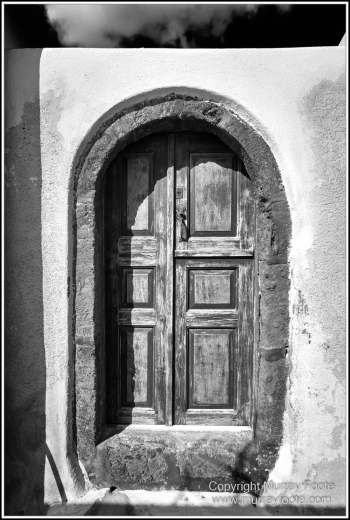 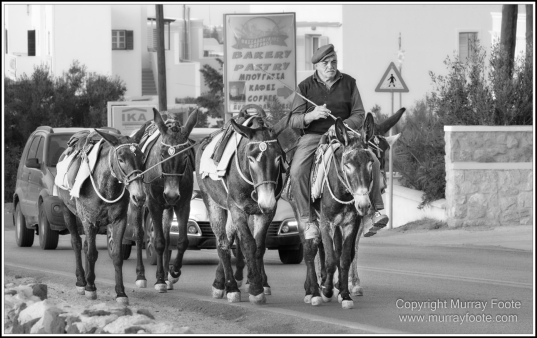 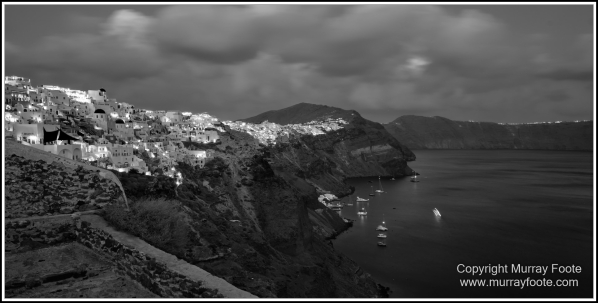 From Emporio, we headed to Perissa and here we are on the beach.

We hoped to visit Ancient Thera, a ruined town that spanned many eras, potentially stretching back 11,000 years, but visible elements are mainly Roman and Byzantine.  The site was abandoned after an eruption of the volcano in the 8th century AD.

I wasn’t aware that there were opening times and we got there five or ten minutes too late.  There was at least half an hour before all visitors had to return and I tried to persuade the gate keeper to let us race up there and be back before that time but he wouldn’t budge.  So the above view of a wall at the top of a cliff was all we got to see.

I’m not sure exactly where this church belltower is.  Perhaps we are looking back at Perissa. 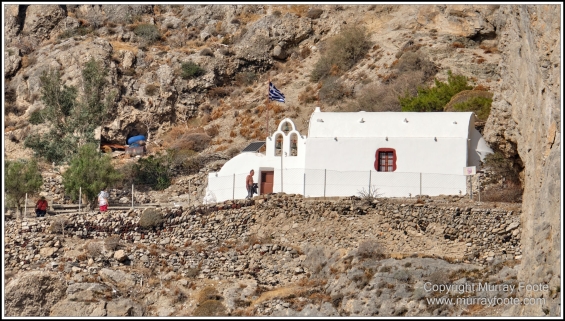 This is the Chapel of Panagia Katefiani, below the Ancient City of Thira.

Back at Perissa Beach again and the yacht has probably moved.  We would have had lunch at the small town here. 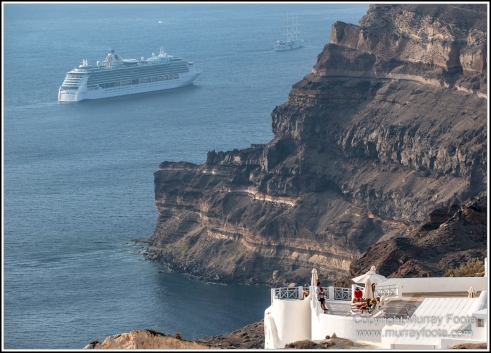 We have now gone back to the caldera side of the island and are somewhere above the Port of Thira, looking north.  in the distance, a cruise ship and a three-masted ship pass by while people lounge below on a house or hotel balcony.

In the other direction, we see a catamaran and a ferry at the port.

A catamaran is leaving port. 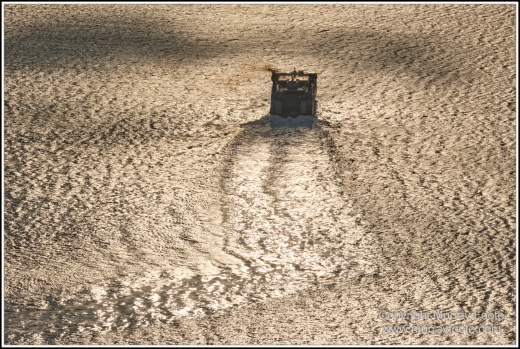 Also a ferry, probably heading for Crete.  The ferry takes three and a half hours and the cat two.  The ferry is much cheaper and also takes cars. 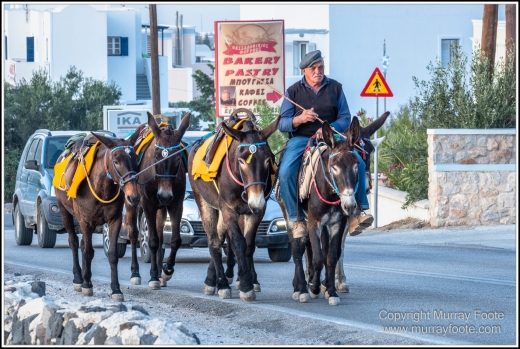 Donkeys returning from a hard day carrying tourists (some overweight) up the steep slopes from the port.  Picturesque and traditional they may be but there is controversy here about cruelty to the donkeys. 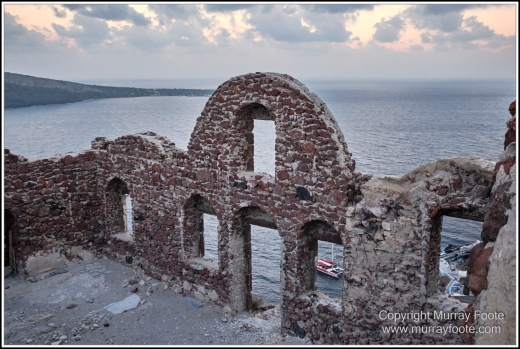 Now it’s much later and we have returned to Oia and I have fought through the dense crowds to get a key position for sunset views at the point.  This is as far as you can go and we are in the ruins of a Venetian Fort, built to safeguard the island from pirates.  Some photographers kindly made room for me when I arrived. 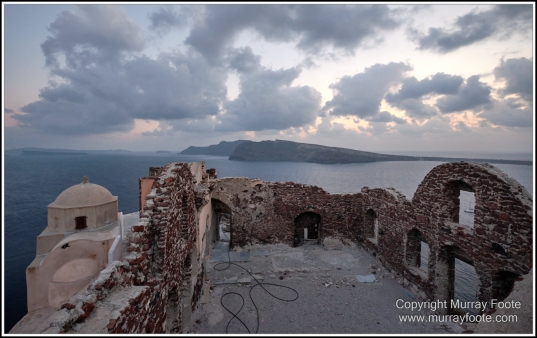 This image may look crooked but it’s actually not.  The eye is drawn to the island on the right rather than the faint horizon behind it..

I am now looking back at the township of Oia, looking towards the north coast.  This is taken with a wide angle lens.

This image and the next three are taken from the same viewpoint, looking at the township of Oia, with a long telephoto lens.  There are a couple in close communion holding beers at the bottom. 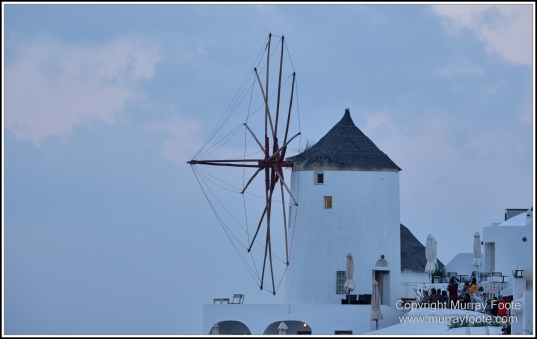 This is one of the two windmills visible in the earlier wide angle view.  There is a light on in one of the rooms of the windmill and thirteen people at bottom right camped for a sunset view (though partly obscured by the watermark, even if you click for a larger view).

This is the other one.  Only two people visible in this one. 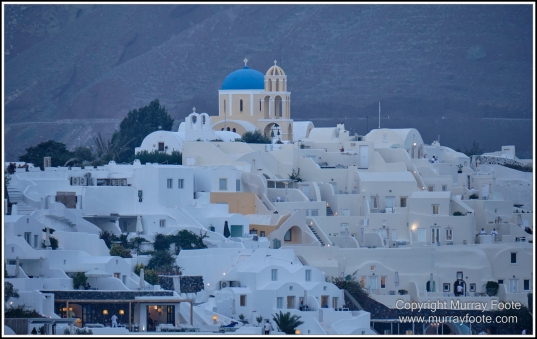 Still with the long lens.  St Sostis Orthodox Church at the top.  I make it twenty one people visible in this one. 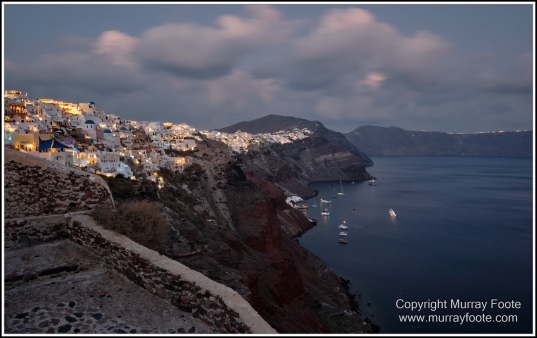 Back to the wide angle.  Looking south at the Township of Oia along the caldera coast.  It’s getting darker now.  this is a thirteen second exposure. 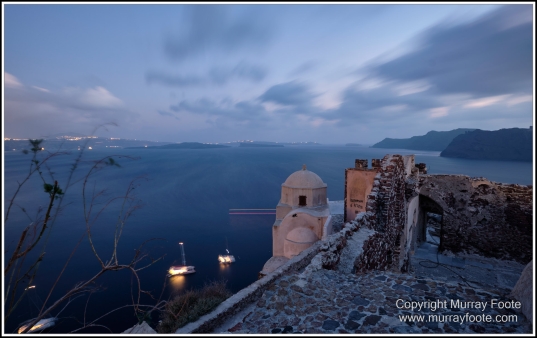 Looking over the Venetian castle at the view across the caldera.  Fifty second exposure this time.

Much later, after dinner and back across the road from where we were staying at the other end of Oia.

This is the map of Thira, where we were to spend the next few days.  It is more commonly known as Santorini, which is the Byzantine name.  Thira is the Greek name and after all, it is in Greece.  The blue lines show our planned travel route, which should be pretty close to our actual route, because I had this route saved in our car GPS.  (You may like to click for a larger image and more detail).

You can see there is a kind of a great blue hole in the centre of the map.  This is the caldera of Thira.  It was dry land until the volcano exploded somewhere around 1650BC, causing no small inconvenience for the locals and also devastating the northern coast of Crete with tsunami.

We stayed in Oia, in the far north of the island, well known for its scenic vistas.  This post is for our first night on the island, in Oia. 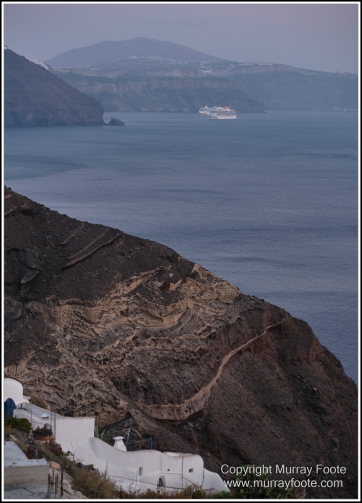 This is looking back along the coast of the island.  The light would have been low and I have resisted any temptation to over-saturate or overly increase contrast in these images.  (Still, most people will be viewing these images on unprofiled screens which may not be entirely accurate).

We are now looking in the other direction, north towards the small township of Oia.  The island of Thirassia is in the distance (one island though it may appear as two). 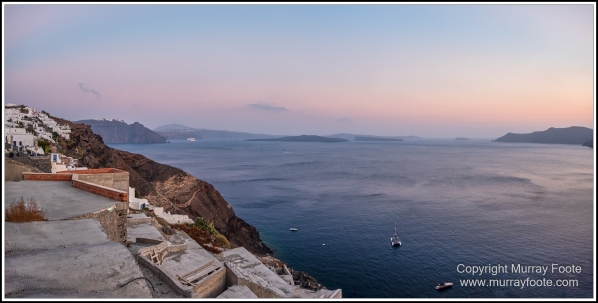 A wider view looking south that gives a good idea of the size of the caldera. 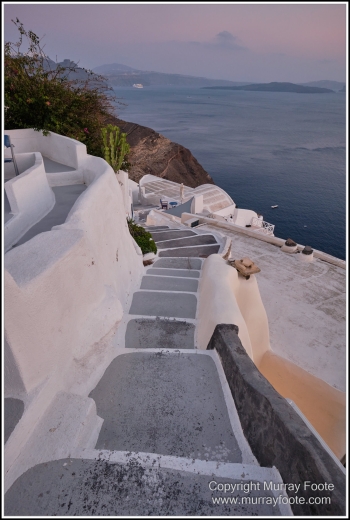 There are many houses perched on the steep slopes of the cliffs, and inviting paths.

This would be a tempting place to loll in the sun in a hot day.

This is just across the road from where we were staying.

People we encounter while walking towards the north point of the island…. 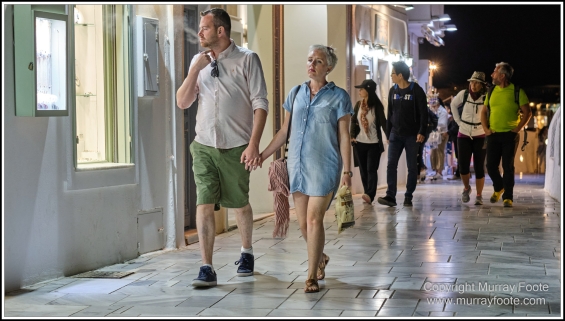 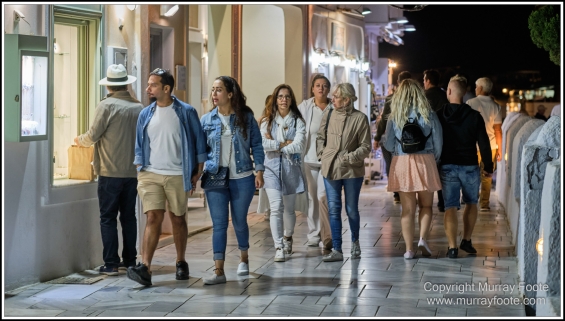 At the top is the Church of Panagia Platsani. 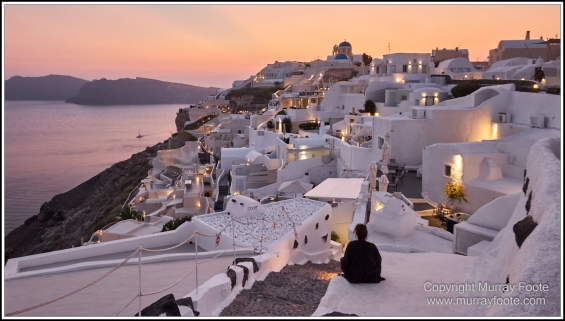 This is much closer and 25 minutes later, but with a much wider angle lens. 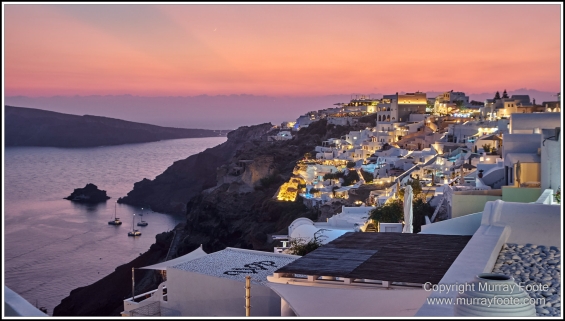 The lights of the town come on as the sun goes down.

The island of Thirassia in the distance again.

A vignette of the multi-layered settlement on the steep slope.