After the cruise in the morning and after lunch, we visited the fascinating Inala Jurassic Garden which ties geological history to surviving plants from ancient periods.  I didn’t take any photographs of the garden but this is a Bennett’s wallaby being cared for there.

On the way back was this abandoned farmhouse. 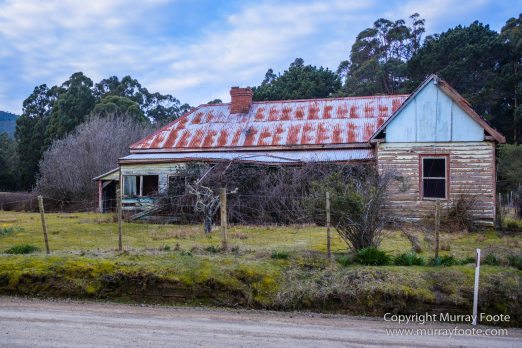 We talked to a bloke living in a house across the road and he told us it was due to be demolished in a week or two and invited us to feel free to walk in and check it out.

House from the rear.

Garage from the rear/ 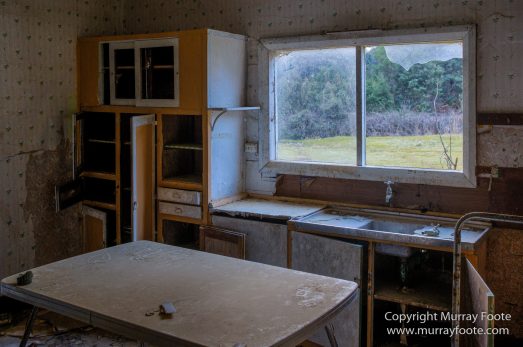 A fascinating glimpse of a home from a different time, perhaps a way of life now gone. 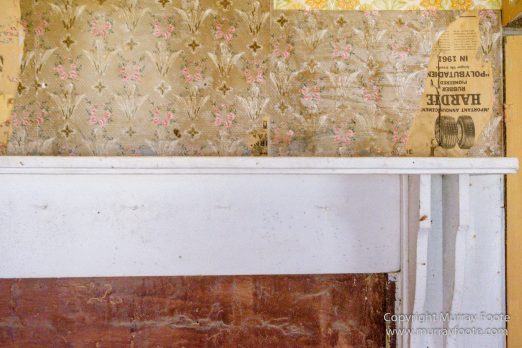 Wallpaper peeled off to reveal newspaper backing.  This one above the fireplace showed a tyre advertisement from 1961.

Fragments include an ad for Carnation Milk and a fragment of a page featuring Complete Home Section by Leila C Howard, Food and Cookery Expert..

Here, underneath the wallpaper is a review of “Around the World in 80 Days”, a 1955 film starring Cantinflas and David Niven. 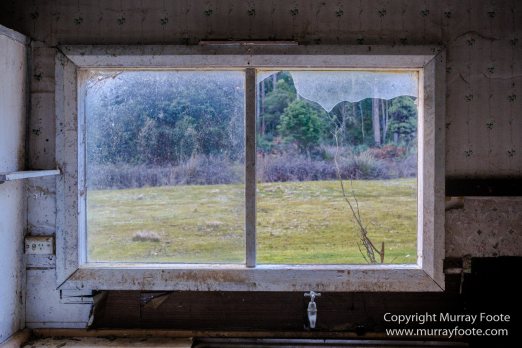 Another view from the back.

… and from the front.

Back where we were staying at the Bruny Hotel, the sun was going down over Satellite Island and the mainland.

At the same time, here are a few houses in a bay just to the south.

After finishing the Overland Track  I picked up my partner Jools who had flown in to Launceston Airport.  We stayed near Launceston overnight and then drove to Cradle Mountain National Park.  Late that afternoon we drove to nearby Cradle Lake.

A Bennett’s Wallaby in the carpark is unconcerned by the passing human youngster.

Out in the lake, a rainbow is touching an island. 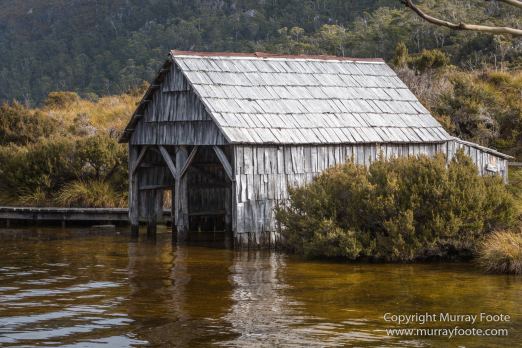 This is the much-photographed boatshed at Cradle Lake, built from King Billy pine by the same person as the one in Crater Lake we saw in an earlier post. 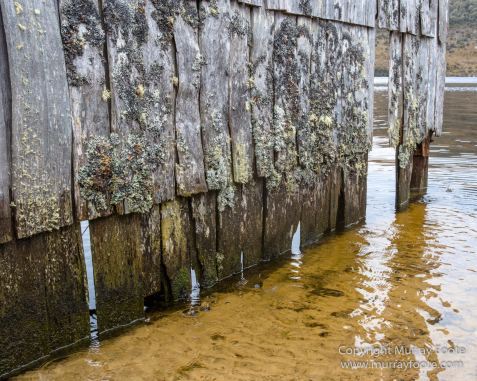 The next day, we drove via Queenstown to Mount Field National Park.  We were staying just outside the park gate and this is a nearby house.

We went for a brief walk in the late afternoon.  Is this animal, vegetable or mineral?  Actually, none of those.  It’s fungi, previously included under plants and now in a classification of its own. 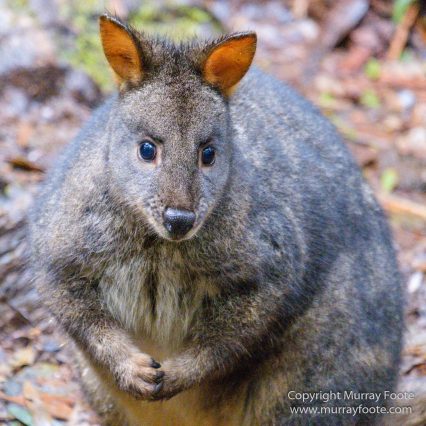 Next morning we headed off to Russell Falls.  On the way we encountered this pademelon poking around in the leaf litter near the path.

I was handicapped here by not being able to use my ultrawide zoom, which had got too damp on the Overland Track. 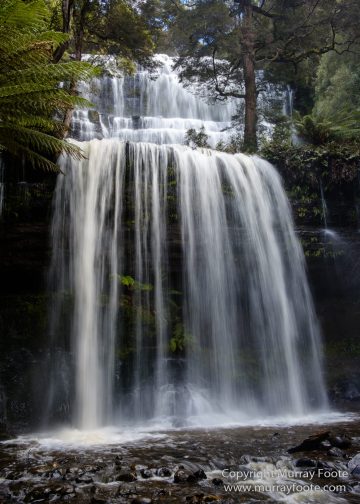 At least I was able to use my tripod to give an impression of the water flow. 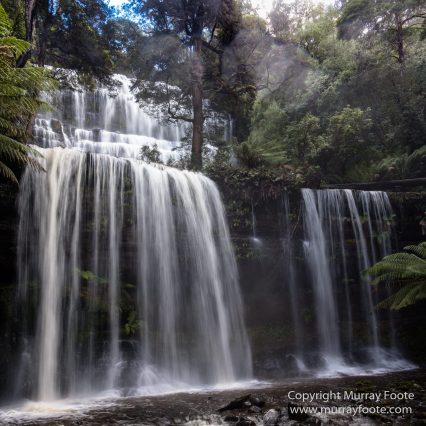 This one I stitched two exposures for a wide enough angle and had a lot of difficulty with spray and flare.

Climbing further up, a view of the falls from half-way up.

I was reminded here how lucky we were on the Overland Track not to have “good weather” when we were in the rainforest.  The extremes of light and shadow meant I struggled to control the exposure, even combining images with HDR.

After Liffey Falls in the last post, I travelled on to meet the rendezvous for the Overland Track walk.  The Overland Track is a 63 kilometre walk through Tasmania’s highland wilderness.  I had done the walk thirty years ago with large format photographic equipment and a pack of 24 kilograms (53 pounds).  I used the public huts then (and you can also camp), but this time I was undertaking a catered trip using private huts offered by the Tasmanian Walking Company.  This meant I didn’t need to carry food because meals are provided and all huts also offer hot showers and drying rooms.

I had opted for the winter tour because I wanted to capture Tasmania’s unique landscape in the snow.  This is much more demanding than the usual summer traverse because trekking through the snow can be harder and slower, and the days are shorter.  As we set off there were ten people in our group plus three guides, although one of our number turned back after an hour because she was feeling unwell.

My clothing weighed 4.5 kg (10lb) including walking poles, and the guidelines for the walk say your pack should weigh 12 to 16 kilograms (26 to 35 pounds).  But with 6.4 kg of camera equipment (14lb), I was carrying 22 kilograms (48 pounds).  This was more than I realised at the time and more than I bargained for.  Based on my previous experiences thirty years earlier, I had assumed I would have lots of time to stop, pull out my tripod and take photos.  However, that was in summer when days are much longer and walking conditions usually much easier (though it can snow here at any time of year).  As it was I generally had to press on with little time to stop for photographs and I was seldom able to use the tripod.  Because my pack was so heavy I was reluctant to take it off too often.  Just as well I had two cameras and four lenses in cases hanging off my shoulder straps and pack belt so I was able to take photographs without removing the pack.  Almost all these images in this and subsequent Overland Track posts are quickly taken on the fly.

Here are some of the group taking off on the walk.  I am still in the carpark and taking this image from there.  We are heading off to the plateau on the snowline at the left. 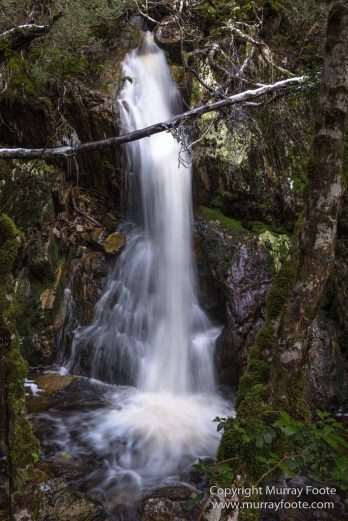 After climbing for three quarters of an hour we got to this small waterfall beside the track, with lots of water flowing through.  You can see it’s a longish exposure but I didn’t pull out my tripod, just braced against a railing.

After climbing for an hour and twenty minutes, we stopped for a little while at Crater Lake.  The boatshed was built by the first ranger at Cradle Mountain, Lionell Connell, to ferry visitors around the lake.  There is a similar and better known one at Dove Lake, accessible by road.  Both were built of King Billy Pine, an ancient and slow growing conifer not available as a building material these days.  That’s ice you can see on the surface of the lake, though hardly solid enough to walk on. 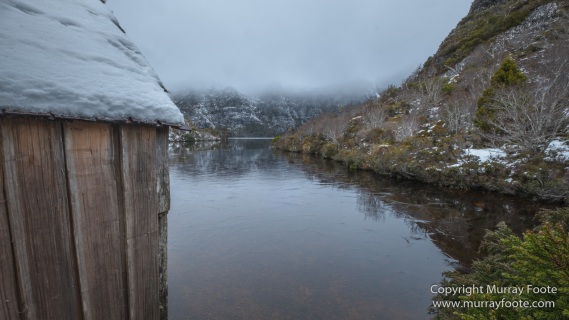 This one is looking back at Crater Lake as we continue climbing towards Marion’s Lookout.  Still a steep climb to go. 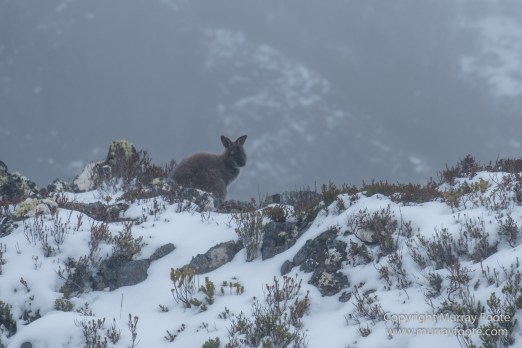 This is further on from the previous image, with Crater Lake out of sight down below the ridge.

Towards the top, the weather closed in and there was heavy snow.  It had stopped snowing when we got to the top and we stopped for lunch.  According to the time stamps on the images it must have taken us about three hours.  We were close to Marion’s lookout but there was no point going there because there would have been nothing to see.  On a clearer day there would have been a magnificent vista of Dove Lake and the wild country beyond.

The weather was clearing and the lack of a view from Marion’s Lookout was more than compensated by magnificent vistas around the Cradle Plateau.

A wonderful vista of distant eucalypts in snow.  Click on the image to see it in a larger size.  I would have liked to stop for an hour or so in this area and explore the possibilities but time was pressing and we had to move on.

In a way this is my Fred Williams image though I wasn’t aware of that Australian painter at that time.  When we got to Geelong, the art gallery had a wonderful exhibition of his semi-abstract landscapes looking down from the You Yang mountains to the arid plains below.  This image reminds me of that though it’s really only the central part with the distant trees in the snow.

Looking east towards the Central Plateau with an angry sky.

Although the weather could be menacing at this point, it was clearing for the rest of the day.

You might think this shows towering eucalypts beside a tarn but it’s tiny, more like a miniature landscape.

A distant view of Barn Bluff.  That’s where we’re headed. 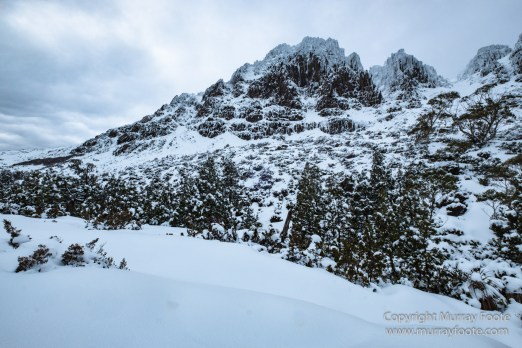 Quick question:  on which side of a pole does moss grow?

This marker pole provides a metaphor for the weather.  Wind-driven snow is caked on one side of the pole while moss clings resolutely to the other.

Answer: It’s the south side here.  If you live in the northern hemisphere you probably got that wrong. 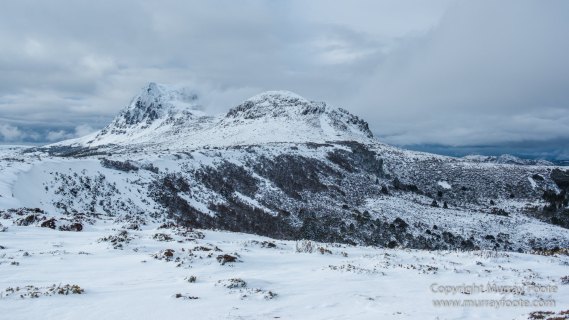 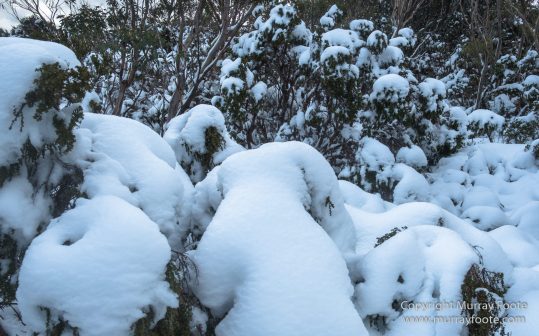 Snow piling up in a sheltered part of the trail in Waterfall Valley. 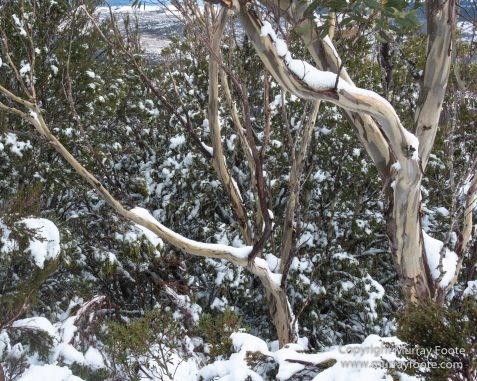 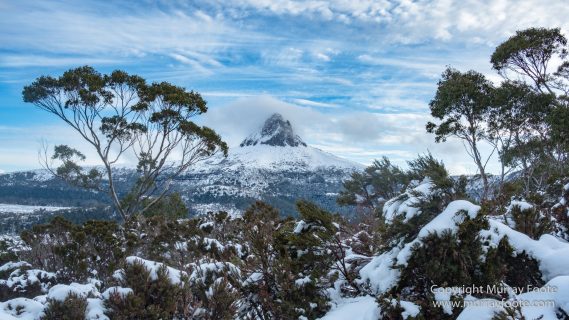 Barn Bluff in the distance, framed by eucalypts. 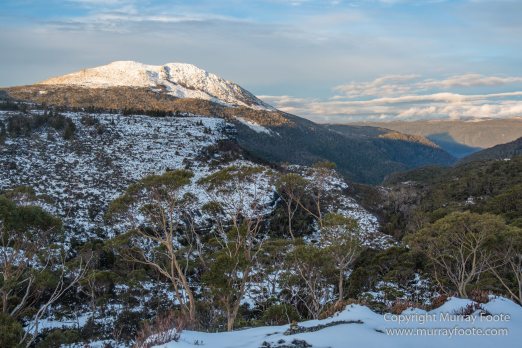 At this stage there was only a kilometre or two to go but it was very rugged.  The problem for much of the day, and especially the last section, was the boardwalks.  Often they were two planks wide, say eighteen inches.  This would be fine in summer but they were covered in about two feet of snow (as with everything else).  It was impossible to stay on them all the time and if you missed them, you fell a couple of feet down into the snow.  I fell over dozens of times and probably so did everyone else.  It had taken nine hours before I got to the hut, starting with the brutal three hour climb to Marion’s Lookout and I was totally exhausted.  Totally worth it, though.  The scenery on the way exceeded my expectations.