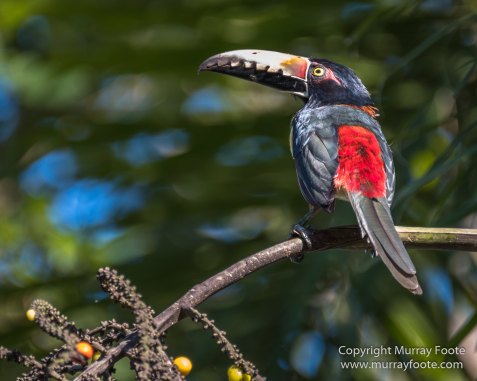 For most of our stay in Guatemala, we were staying at Ecolodge El Sombrero, in the jungle, beside a lake and very close to the Mayan ruins of Yaxha.  On our first morning we saw this collared aracan, one of the three toucans of Guatemala. 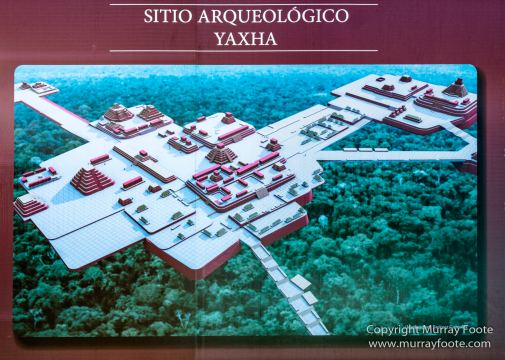 The archaeological site of Yaxha overlaid on the jungle of today.

This is perhaps a bit misleading because it only shows the centre of the city, which would have been surrounded by many fields and houses, mainly yet to be excavated.

I had the idea before visiting that there were just a few cities nestled in the jungle whereas there were in fact many dozens and a dense population where not many now live.

Yaxha is one of the largest Mayan sites in Guatemala and the site contains over 500 structures, with nine plazas, 40 stelae, several pyramid temples and ball courts.  It has a long history of occupation from 1000BC to 900AD.  It reached its peak during during the Early Classic period of AD 250–600 and there is some indications of influence from Teotihuacan during this period.  Yaxha is the original Mayan name, meaning “green waters”.

One of the many pyramids, though the stairs on this one have eroded towards the top.  As with all these images, click for a larger view.

Stela, though with the top of the engraved figure missing. 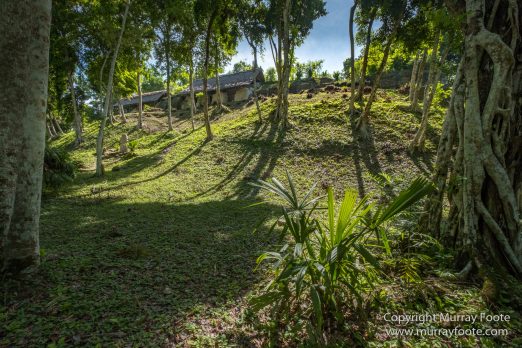 Ruined buildings at the top though the whole slope would have been artificial and terraced.

A platform or altar nearby.

We have now climbed up to the ruined buildings from two images ago.  Also next image.

They are rooms or small houses.  I think this may be “a palace-type structure in the East Acropolis”, probably “structure 218”.  Either that or a place for priests and sacred objects.

In some places there were information boards in Spanish.  I have scanned and translated these electronically.  However, because I could not read them at the time, my images may not entirely illustrate them.  Also, in some places, the translation may be imprecise.

“The last construction stage of the Acropolis was in the Late Classic period (600 700 AD).  The West Palace (structure 218) served as access to the square and the Temple of the Red Hands; both buildings covered older constructions. The priests stayed in the North and South palaces, probably with the sacred objects used in the rites.

The Temple of the Red Hands exceeds 30 meters in height; at the top it had a crest decorated with a mask. In the precinct you will find several Mayan graffiti and red hand prints. Under the staircase a tomb was discovered from the Late Classic period.

Beneath the Acropolis East there are several ancient buildings that date back to 200 AD. After the abandonment of Yaxhå, some Postclassic inhabitants of Topoxté visited the Temple of the Red Hands to place offerings in a gesture of historical memory.” 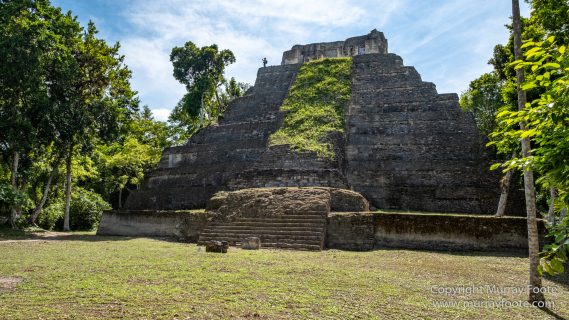 You can see the person standing on the top of the pyramid but only the bottom steps are still intact and climbing up looks very precarious, so how did they get there?  Well, there is a wooden set of stairs at the back of the pyramid.

We climbed those stairs and were able to see views from the top, here looking out towards Laguna Yaxha. 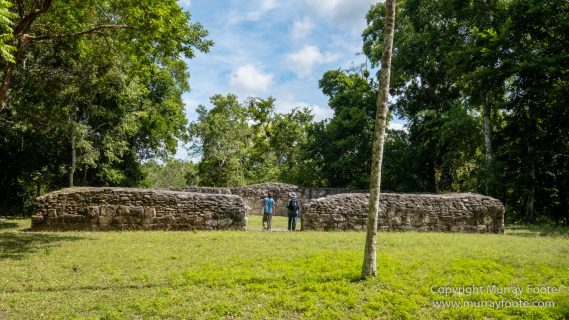 Residential area of the East road.

“The East Causeway is located between the Twin Pyramids Complex and the Acropolis of the Toucans (Acropolis Northeast). In an intermediate sector that borders on roads 2, 3 and 4 stands out a residential complex organized in several courtyards that correspond to the tenth century AD.

The dwellings were built with low-recess walls white-washed and roofed with guano and corozo palms; They housed several families grouped together.

Cooking and the production of pottery was shared communally.” 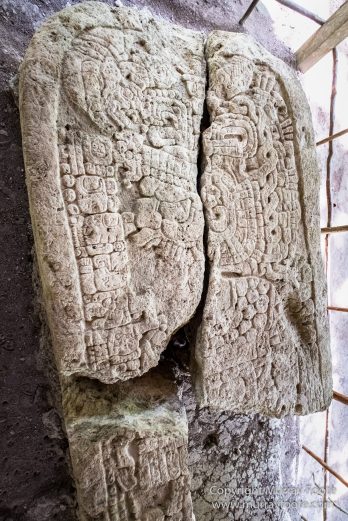 This stela has a particularly clear representation, probably of a ruler (I neglected to spend the decades of preparation to be able to read the Mayan glyphs). 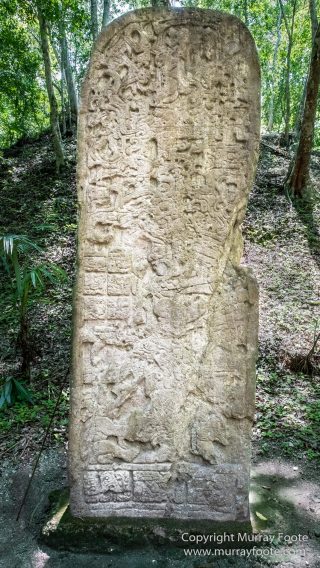 Stela at the Plaza of the Birds (which is unexcavated, behind)

The imagery on the stela shows wonderful complexity.  I wonder whether it was originally brightly and intricately coloured.

“The whole area is bounded by the Acropolies of the North and Northeast. The Plaza of the Birds is one of the largest urban spaces built in Yaxhå during the Late Classic period. There is a Ball Court in the northern sector, while in the East is a long basement that held three sanctuaries related to the three levels of the creation.

Among the three monuments erected on the square, Stela 31 stands out due to its complicated designs that include several birds and nature themes evident in the main character’s headdress.”

This one is quite near the one in the previous image.  Note the people carefully picking their way up and down (It is steeper than it appears here).

This is the same pyramid but this image gives you a better idea of the difficulty of climbing the pyramids.  Not only were they very steep with no hand rails but the steps were very large, being approximately 30cm or 12 inches, twice as high as standard steps today.

We are on an ancient roadway that also collected runoff water in ponds.

“In addition to functioning as a communication channel between the Greater Astronomical Complex (Group F) and the Plaza de las Sombras (Maier Group), the roadway also served to capture and distribute the rainwater. The surface was covered by a stucco floor, which allowed the water to slide into channels that led it to be stored in watered ponds located in the east sector.”

Plaza of the Shadows

“It is one of the widest squares in Yaxha, designed for large crowds.  The ceremonial processions ended here, after stops at the North Acropolis and the Causeway of the Aguadas. At the west of the square is the Temple of Boards whose final version was built between 750 and 800 AD. On the east side of the Plaza de Las Sombras is a long terraced terrace on which two temples rest, beneath which there were constructions that belong to the time of the first inhabitants of Yaxha. Three stelae and a large altar were erected at the foot of the main temple’s staircase. In the temple that was oriented towards the south there were masks on the sides of the stairway; between 750 and 800 AD they added aggregate enclosures to the sides of the main façade.” 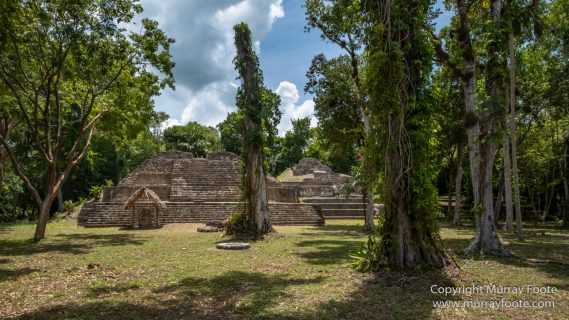 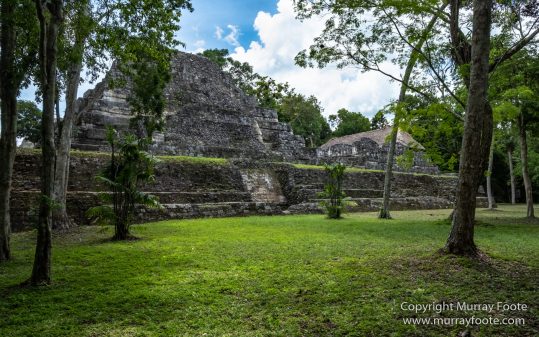 Plaza of the Setting Sun.

“It is located on the western edge of the city of Yaxhå. On the east side, the Great Pyramid of the Astronomical Complex stands out, which had masks maybe related to the subject of the Setting Sun. In the western sector there is another pyramidal building that could also have façade masks. The pyramids of the Plaza of the Setting Sun are part of an East-West axis that extends along the central sector of Yaxhå, symbolizing the daily course of the sun in that direction.” 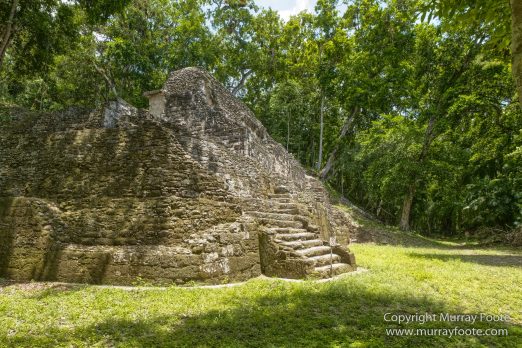 “It is one of the oldest architectural ensembles of Yuxhåi during the Preclassic period, which functioned as the main square of the city, where ceremonies related to the sun worship took place, in which its daily and annual displacement was commemorated.

In the west sector of the square stands a truncated pyramid with staircases on the four facades that demarcated masks that represented celestial deities. The eastern side of Plaza 10 is a longitudinal basement that originally supported three sanctuaries, of which the central one stands out, sharing a 90-degree axis with the center of the Great Pyramid.

The sanctuaries that occupied the north and south ends are located at angles close to 23 degrees from the center of the Great Pyramid, and are associated with the location of the sun during the summer and winter solstices, Although these sets are called observatories, Its main function was to commemorate the transit of the sun, because the buildings are not oriented astronomically north.”

“It is located in front of the northern façade of the Royal Palace (Acrópolis South). The ruler and members of the court witnessed the performance of the game from above. The court is delimited by two parallel platforms oriented from north to south; the north direction corresponded to the Sky that was associated with light, while the south was corrected with the underworld linked to darkness.

The reduced space of the yard indicates that the game could have been played by no more than three individuals per team. The marker used to be placed on top of the walls, or on the ground in the central sector of the courtyard.

The game had a very important ritual and political connotation, since one of the members of the team was sacrificed. The rubber ball that represented the sun was propelled with the knees and hips, for this the players were protected with knee pads and wide girdles.

The ruler participated as a player when it was necessary to solve policy differences between antagonistic cities.”

Walkway of the Quarries
(Lincoln Road)

“In addition to functioning as a direct communication route between the Lesser Astronomical Complex (Plaza C) and the Royal Palace (Acrópolis Sur), the causeway also served to displace large blocks of limestone that were used for the construction of buildings.

The surface of the roadway was covered by a thick stucco floor, which allowed heavy materials such as stelae and altars to be moved with rollers from the production quarry to the plaza where they were exhibited.

To obtain stone, the Mayans made deep cuts in the quarries; At the end of the construction work, some of the large depressions were conditioned to be used as gutters or ponds.”

We have now walked a circuit and this is the pyramid we climber earlier, but very late in the afternoon, just before heavy rain. 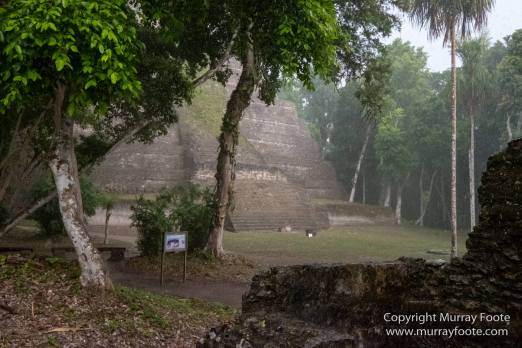 So we take shelter as the rain pelts down. 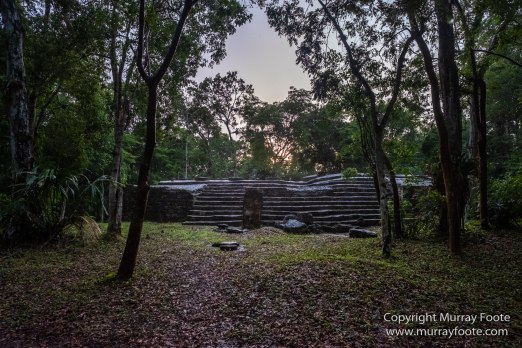 You can see how uneven the steps and top of this structure are.  The stones must have been laid straight so this is probably evidence of earthquakes over the millenia. 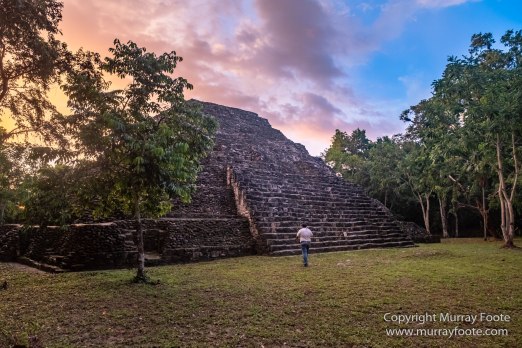 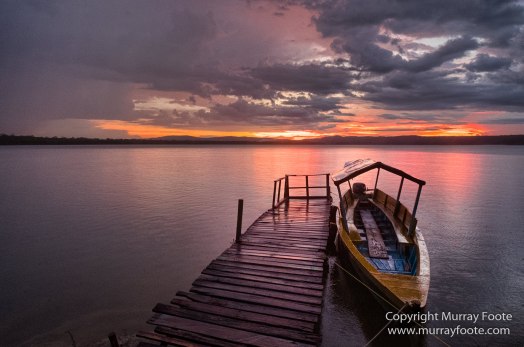 And back at Ecolodge El Sombrero, the sunset glows across the lake.