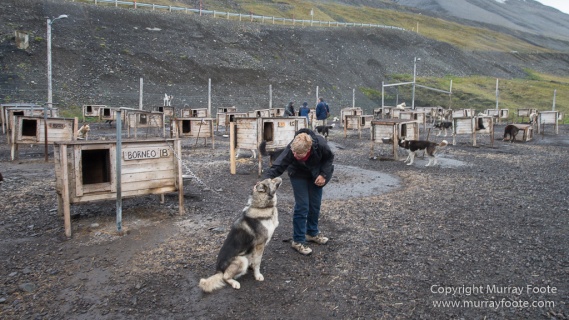 This was the day I was to depart with 48 others on an AuroraExpeditions cruise up the coast of Spitsbergen, across to Greenland, down the coast of Greenland and then across to Iceland.  I went out to the airport to meet the other expeditioners as they arrived on the plane.  We then went for a tour around Longyearbyen on the bus, including a visit to this “husky hotel”.  Some dogs we could say hello to; others we were warned to stay away from.  Borneo was one of the friendly ones.

Later on in Greenland we encountered another pack of huskies that was much better cared for and much happier.  Maybe this was more like a canine concentration camp than a hotel. 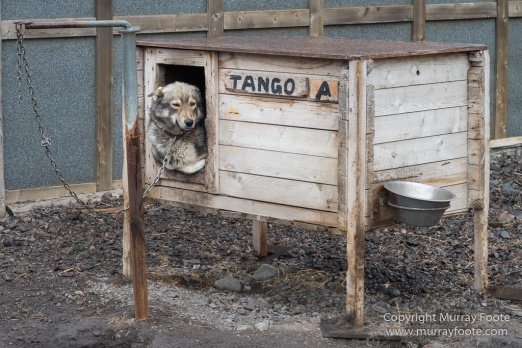 I remember that Pingo was one we were warned not to approach too closely.

Nearby there were three reindeer in an open meadow.

An old coal mining plant with Longyearbyen in the background.  The population is over 2,000.

Having boarded the ship (Russian icebreaker Polar Pioneer), we had a lifeboat drill.  Climbing into the claustrophobic capsule in calm conditions was one thing; being tossed like a cork on a stormy sea with 3D vomit flying round might be another.

And so we were off into the wilderness of Spitsbergen.  We had been sailing for two and a half or three hours.  I would think we were still in Isfjorden, the fjord leading to Longyearbyen.