From Tingwall I drove to Corrigal Farm Museum. It is described in some of the Orkney web sites as an intact nineteenth century farmhouse but it is much more than that. For one thing there is a broch nearby and the area has been farmed since neolithic times.  For another, the farmhouse itself is an Orkney adaption of a Viking longhouse, so perhaps it even started as one.

And here is the office and behind it to the left, the museum.

Going past the office, here is a collection of old ploughs and farm machinery arrayed on the lawn.  The actual museum is the second building and the entrance to it is the first door in the distance.  I didn’t take a closer shot of the building from this side so I’ll talk about it here.  Also known as a but and ben house, there are a series of rooms along its length.  First is the ben or bedroom, then the but or kitchen/ living room.  There is a door between these two rooms and the rest of the house to prevent unwanted access by animals.  Next there may be a byre (for cattle) and a stable (for horses), then a grain preparation area and finally a kiln for drying the grain.  Some young animals or animals in special need of attention might also reside for a while in the but.

Here is a space between the two buildings where peat is stored, for use in burning on fires.

This is the ben or bedroom.  The structure behind is a cupboard or wardrobe but the structure in front is a box bed.

This is the but or living area, and probably some bread simmering over the fire.

This is a trap for some small animal, I don’t remember what, but it looks very similar to traps I would later see in Greenland that the precursors of the Inuit set for foxes. 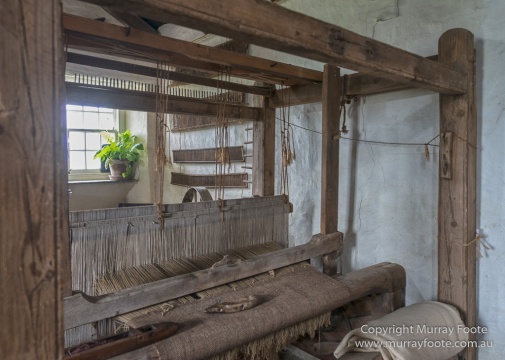 A rather elegant-looking cart. 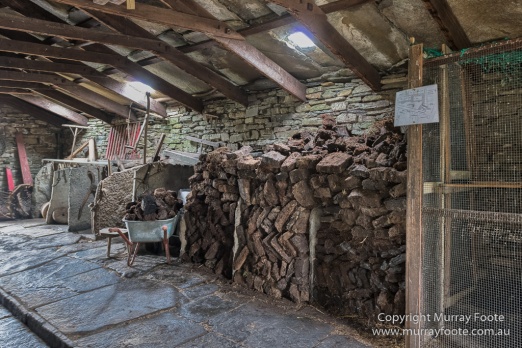 Stacked piles of dried peat for the fire.

A small hand grinder on the right and it must be the furnace for the kiln on the left.

Looking through to the kiln.

And finally, a view of the farmhouse, looking back from the outside.