The morning of my last day in Japan….

The owner of the ryokan (accompanied by his collie) is shoveling snow from the pavement behind my rental car.  This was the coldest day with heavy snow falls that winter, or for that matter the coldest such day in the last five years.    Unusually cold and snowy winter conditions for Nikko.

This is a view along the street where I was staying, including one of the neighbours clearing snow. 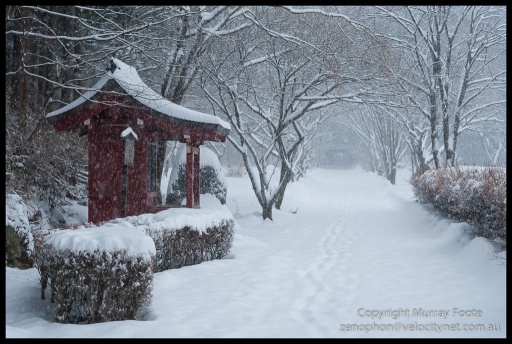 I took off for a walk along the Kanman Path, close to where I was staying, with my camera safely encased in a waterproof cover. 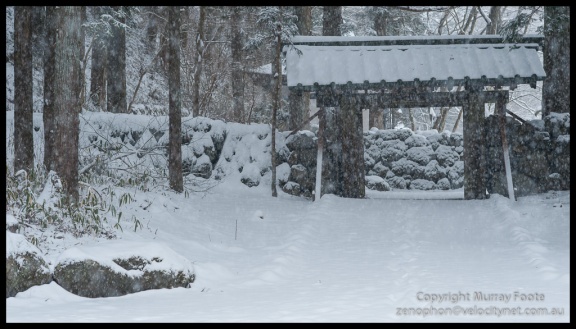 The image above shows a gate of the Jiunji Temple, and you may also be able to see that gate in the distance in the preceding image.  Jiunji Temple was built in 1654, washed away in a great flood in 1902 and rebuilt in 1973.  I didn’t visit the Temple (which wasn’t open anyway) but walked in the other direction along the path. 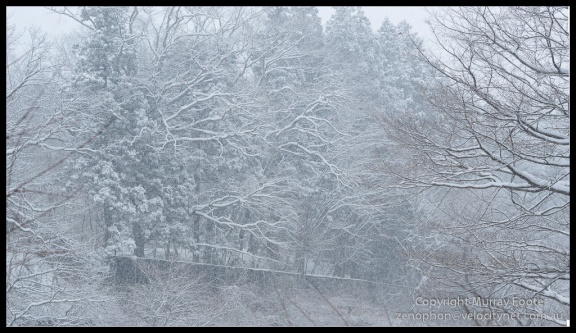 This is a view of the Kanmangafuchi Abyss, said to be created in an eruption of nearby Mount Nantai. 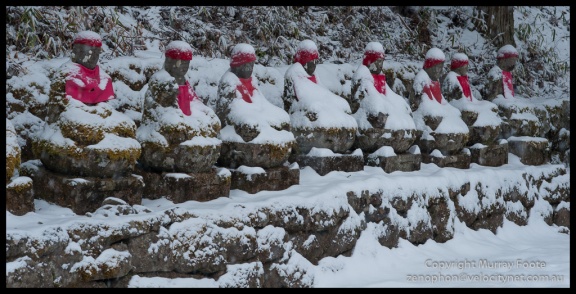 Along the Kanman Path there are around seventy statues of Jizo, though there were around one hundred before the 1902 flood.  There is a legend that the presence of ghosts or spirits makes it impossible to count the number of statues.  (A passing Yanomami Indian would successfully count them as many, using their counting system of “one, two, many”.  I didn’t notice any Yanomami Indians at the time, though.)

This is a view across the Kanmangafuchi Abyss to the Nikko Botanical Gardens.

This is the normal route into the Reihi-kaku, piled high with snow.  The Reihi-kaku is a small pavillion and you can see its roof in the background to the right.  The original Reihi-kaku was built in 1654 but washed away in 1902.  The current structure dates from 1973.  A holy fire burned in the original building but not in its modern replacement. 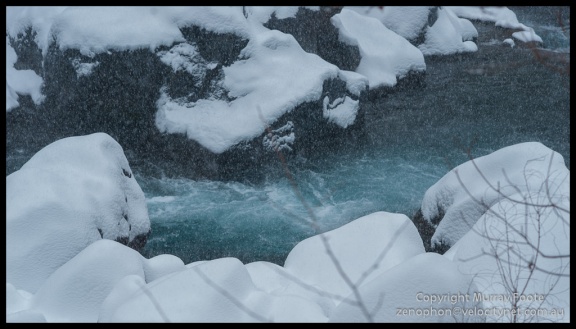 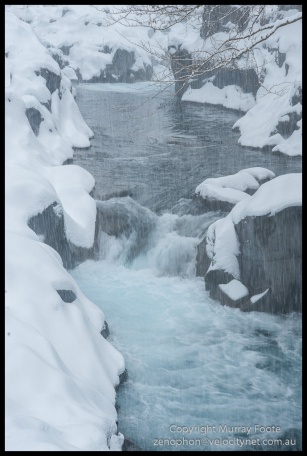 This is the Kanmangafuchi Abyss from Reihi-kaku, a particularly meditative viewpoint.

A last look back at the lines of statues of Jizu.

Further on, here is a small Shinto temple beside the path.

And this is nearly at the end of the path.