This is half an hour before dawn and the temperature is about -20˚C (-4˚F).  You can see the crescent moon high in the sky.

Kotan and Sunayu (see previous and next posts) are on the far side of the lake.  Kotan is at the mid-right behind a small peninsula and Sunayu is behind Naka Island, near the right tip of the island.

The sun is now peeking through over the horizon.   The exposure is 8 stops less than half an hour before so the level of light is 256 times greater.

Previously we climbed up to the viewpoint of the lake from the parked bus.  These frosty trees in falling snow are on the way back down. 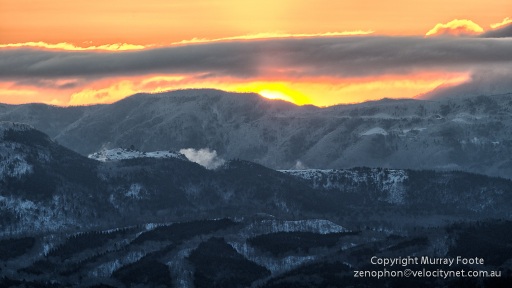 Now we are further back down the hill, near the bus.  Due to the change in elevation, the sun once again was just peeking out over the distant hills.

One comment on “19th February: Hokkaido – Lake Kussharo at Dawn from Bihoro Pass”