Finally, at the end of the path, I reached the Silver Pavilion.  This was built by Ashikaga Yoshimasa, the grandson of the shogun who built the Golden Pavilion (Ashikaga Yoshimitsu).  It was planned in 1460 but due to the Onin Wars was not completed until the early 1480s.  It was Yoshimasa‘s residence from 1484 and became a Buddhist temple after he died in 1490.  It was originally intended to be clad in silver, though that never actually came about.  According to one source, it is best viewed by moonlight (when of course the gates are locked and it is not accessible).

The most magnificent thing about the Temple is actually the garden.  Here are details from the zen garden flanking the path on the way in. 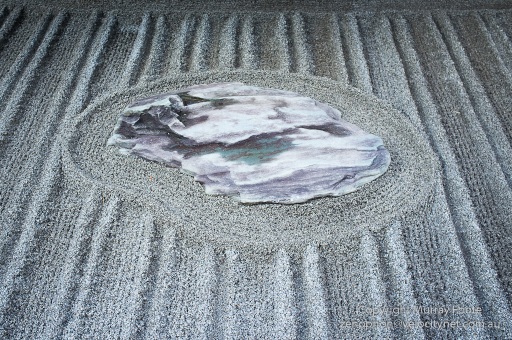 Many of the elements in the view from the image above date back to the time of original construction by Ashikaga Yoshimasa.  The Silver Pavilion itself never burned down though most of the other original buildings do not survive.

Ashikaga Yoshimasa (1435-1490) was shogun 1443 to 1473.  He was a great patron of the arts but not so successful politically.  In 1464 he adopted his younger brother Ashikaga Yoshimi and persuaded him to leave the priesthood  so there would be no contention over his succession.  However, the next year he unexpectedly acquired a son, who was then his favoured successor.  This led to the Onin War of 1467-1477, though it was partly merely an excuse for conflict between two leading daimyo, Hosokawa Katsumoto and Yamana Sōzen.  Both had armies of 80,000 men, encamped in eastern and western Kyoto respectively.  By the time the war fizzled out, with both leading daimyo dead and no advantage to either side, most of Kyoto was devastated.

Yoshimasa is said to have quietly take refuge in meditation and artistic pursuits while the war raged around him, perhaps rather like Nero is said to have fiddled while Rome burned.  However, at least in Nero’s case, this is not now generally seen as an accurate depiction.

The Ashikaga shoguns after Yoshimasa had little power and were the effective captives of powerful clans.  The end of the Onin Wars didn’t bring peace, either.  Instead, general conflict spread across the country in what became the Sengoku or Warring States period until stability returned with the Tokugawa period at the beginning of the seventeenth century.

The sand sculptures were not present in the early years of the temple and date to the early seventeenth century. 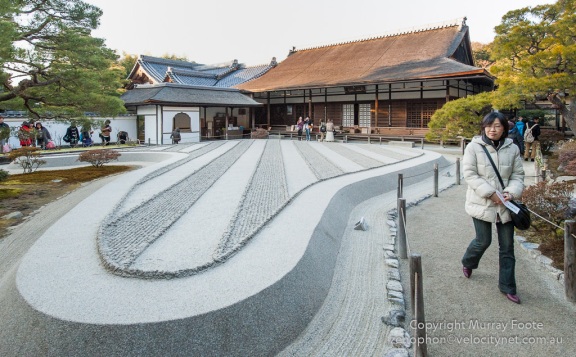 The Hondo or “Spirit Hall” lies beyond the Gishanden or “Sea of Silver Sand”. 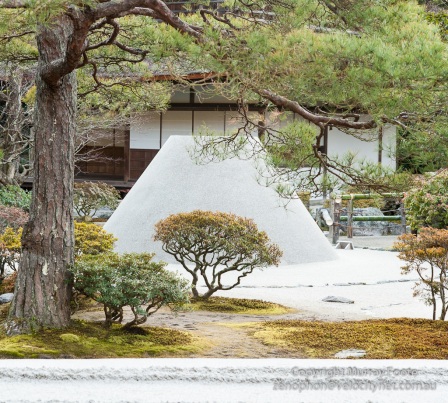 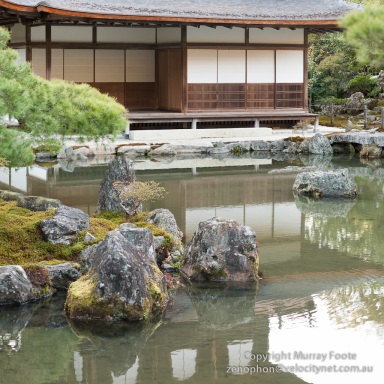 Ginkaku ("Silver Pavilion") and Kinkyo-chi ("Brocade Mirror Pond"). A view that may be little changed from the late fifteenth century. 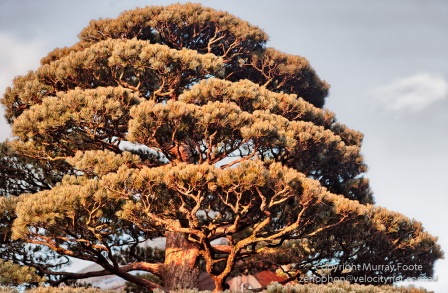 Tree in late afternoon near the Silver Pavilion

One comment on “29th January: Kyoto – The Philosopher’s Path – Ginkakuji (The Silver Pavilion)”